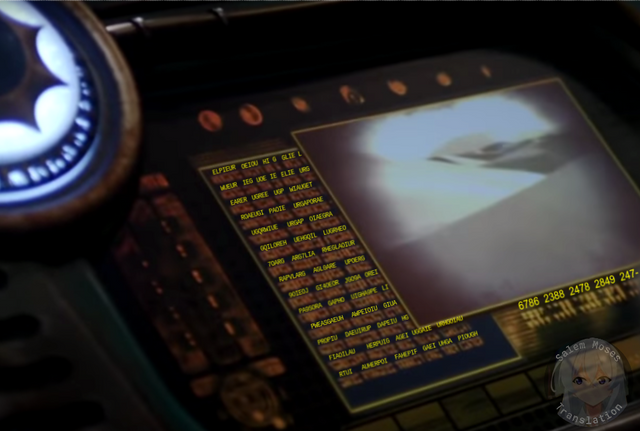 ..was looking into the automated stargate seed ship and came across this image. The screen looks to have an exterior camera view of the ship, which would be helpful since there is a huge blindspot beneath Destiny where the seed ship connected up at. Probably connected? The text was really difficult to distinguish clearly as they are fuzzy (blurred in camera view during show). But long story short, nothing intelligible was written down on the screen.
Top 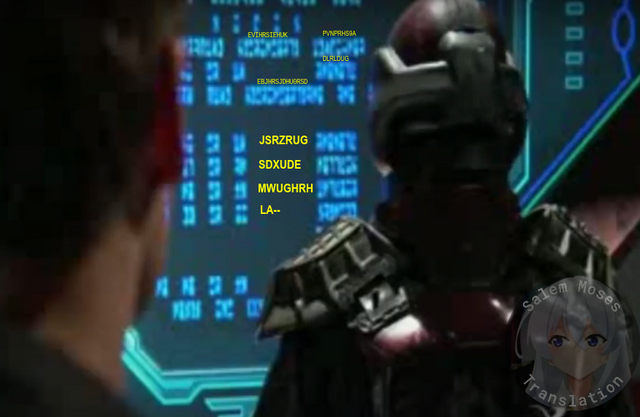 A lesson in patience.

Something to chew on.. doesn't the Vanir spacesuit look very similar to Atlantis utility suits from the Ancients as seen in SGU? Pehaps, the Vanir came across discarded Atlantean utility suits and modified them for their own purposes. Like a forearm enegy shield, improved armor (looks newer than seen in SGU), etc. Imagine the SGU getting the blueprint update. Since Destiny doesn't have a metallurgical facility, they should at least receive a wrist mounted body shield for conducting emergency repairs on the outside of the shuttle while deflecting micrometeorites. Umm.. maybe it can be mounted on the back since they would need both hands to work on the repairs. Plus the camera can do a pass-by viewing high velocity impacts on the energy shield mounted to a person's back, as the camera pans to the front to view the intense focus of whoever is trying to MacGyver the shuttle to work again.
Top

The crystal chips which help control power to different systems, routing "here" but not "there".. sometimes has ancient letters identifying their purpose. Some chips are even reversable, meaning that a reverse control is on the opposite manner of insertion. 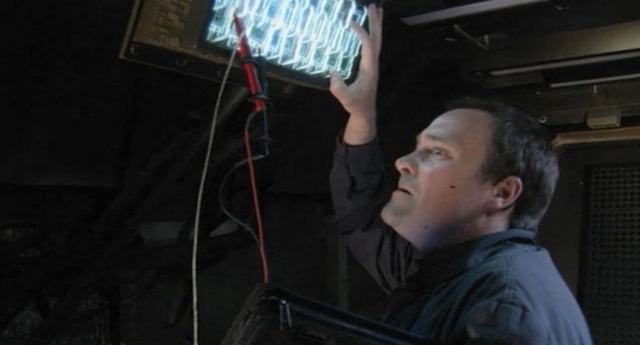 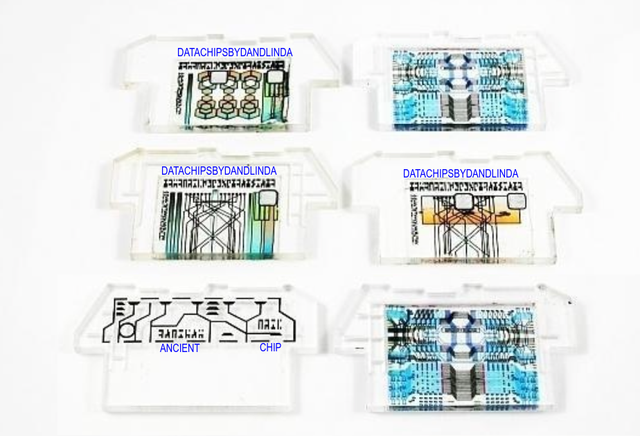 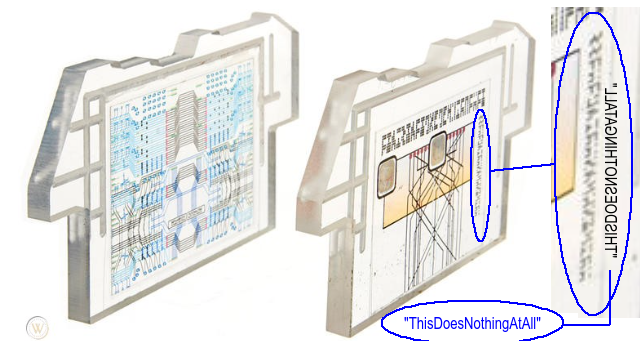 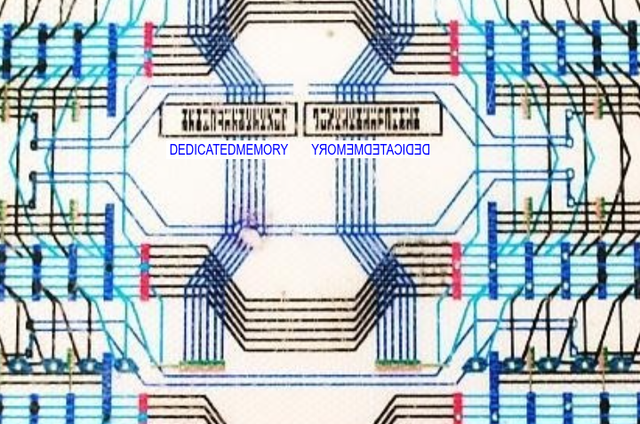 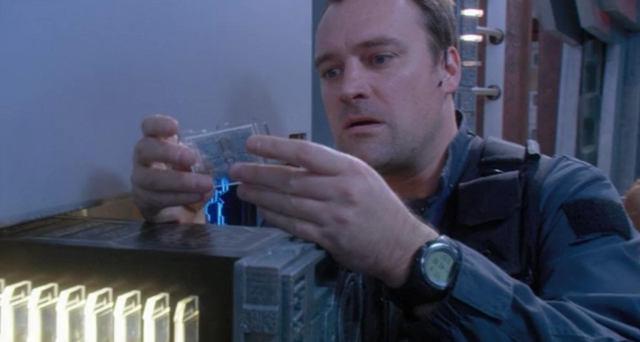 It always helps to comprehend the foreign language of the device that you are working with.. just so things don't go BOOM.
Top

A walk-through on translating an obscure hidden text 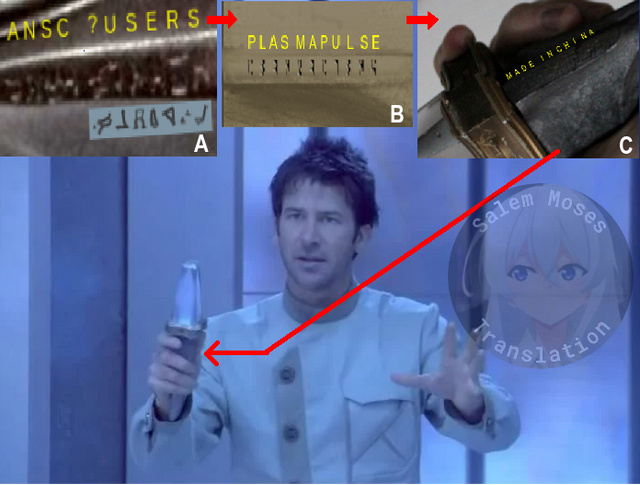 This hand stunner was from the episode when John Shephard plugged himself into an active Ancient simulation onboard their ship and within that virtual reality.. convinced the captain that the wraith were using them to gain hyperdrive technology to reach Earth. That he should probably blow up the ship and everyone on it.. just to be safe (I now wonder if the Captain's expression was like ours in listening to a car salesman). Okay.. I came across what looked like scratches on the side of the hilt, which then looked to be text that was etched into the side (maybe it was the blur from the image). I was really having difficulty with the enlarged imaged ("A") as the text characters really didn't want to fit what I was familiar with. It HAD to be Ancient text, but my goodness.. Then I stood up and looked at my computer screen upside down.. then flipped the image horizontally.. which then had the text to make more sense (more or less) in resembling a "bit" more with the Ancient alphabet that I was referencing. Still, some symbols didn't want to fit. So I then noticed the three symbols under my yellow "?..U..S.." looked like stargate address symbols. I pondered on this, and thought that maybe the owner of this weapon had etched the gate address to his home in Atlantis. People on the front lines, weary of war, tend to make momentos of home. Well, the rest of the Atlantis gate address didn't fit the etched symbols, whereas Atlantean alphabet characters did. What to do.. Then I pulled up the blueprint schematic (Image "B")(https://i.ibb.co/hMBFfgc/Aurora-Hand-Stunner.png) for that weapon and found clear legible text on the side which spelled "Plasma Pulse". Cross-referenced the two sets of symbols on both images, and they didn't match. What to do.. Then I pulled up another image of the weapon which was on a prop restoration website (image "C" ), and went to work plugging in letters. So as you can see, being an archeologist is not all fanfare and glamour. Most of our work is spent scratching our head and wondering why we didn't choose another career path. But in truth, we do it for the thrill of discovery. Of rescuing some obscure and overlooked bit of information that otherwise would have been lost to Time. So wherever fate may take us, I think we'll continue to do good work.. yes.

In plugging letters in for the Ancient text, we end up with the words "Made In China". Clearly, humans aren't without humor.
Top 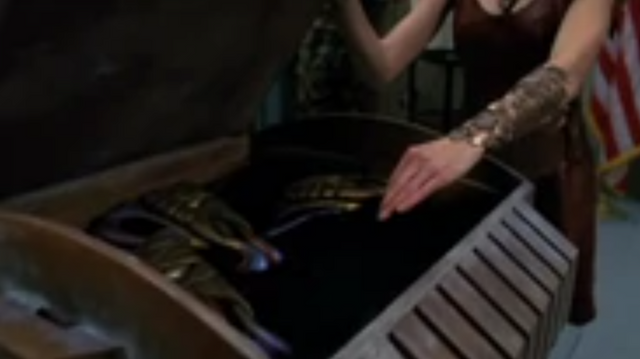 The Atanik (episode "Upgrades") were a civilization which used.. (in our familiar colloquialism) a "super soldier serum" (reference Captain America) to upgrade their military in order to better protect their civilization from invaders. However, over time the soldiers built up an immunity to the armband injected virus which rendered the armband (and it's boosted benefits).. mute. This led to the downfall of the Atanik civilization as it could no longer rely upon it's augmented military (which there were none in the end) and the armbands were lost to time. Until a To'kra researcher discovered the armbands and further along in her research. She enlisted SG-1 personnel to test-drive the devices for further indepth study. Initially, upon putting on the device, Daniel Jackson saw an inscription along the side and read it as "With Great Power Comes Great Responsibility". To which the To'kra scientist added, "And The Ability To Effect Great Consequences". The inscription is shown below. With the translation given by Daniel Jackson, we can use letter substitution to build an Atanik-to-English Alphabet for future use if more Atanik artifacts are discovered. 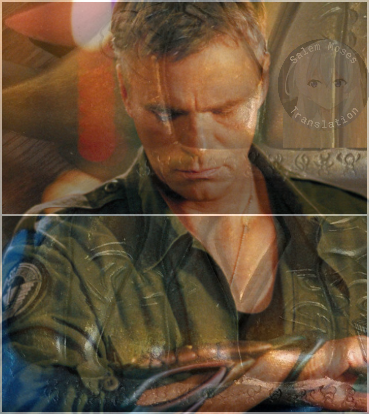 I've overlayed Jack O'Neill's image to help mask the Atanik symbols until I can put together an alphabet cypher to include in this post later.

-Tummy not feeling well.. a project for later, then.
Top 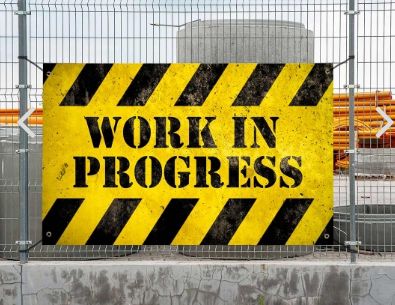 ..am reworking my earlier post of an archaeological research hypothesis based upon new discoveries from Teyla's ancestral city while referencing pictograms left on the wall of the cave she showed Sheppard.

..yes, there is now certifiable proof that a strong Atlantean-Arhosian connection did indeed exist.

I will post my archaeological hypothesis here tomorrow.. if my off-duty schedule remains open.
Top

Apologies for not regularly posting in this topic thread. I've been sharing my poetry and thoughts in the "Off Topic: Poetry" section of the forum. They begin on page 38. 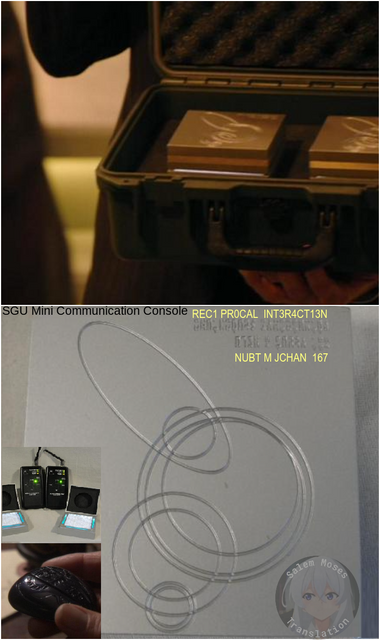 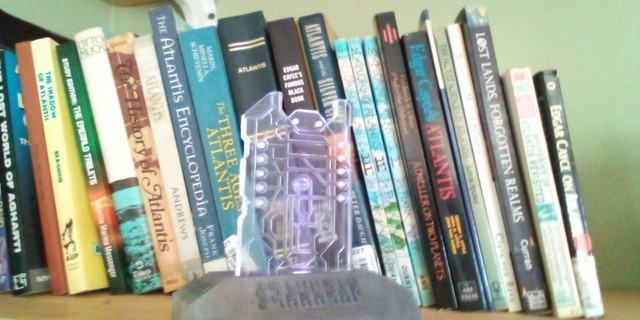 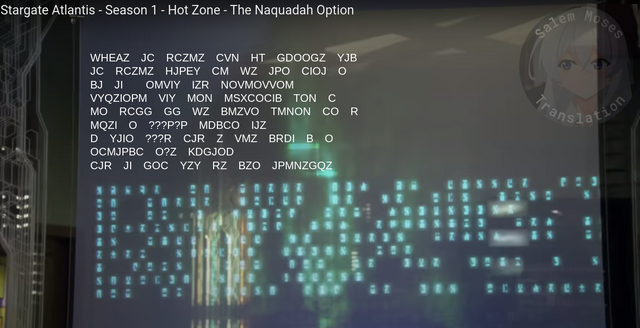 This was the episode when a virus had embedded itself into the computer operating system, having the Bio-Security Measures to not disengage following a foreign viral detection. The city was on "lockdown" with no "exposed" persons allowed to leave their current room of occupancy as the transporter system became unavailable. Only Shephard in a hazmat suit was deemed "uninfected" and therefore could go from room to room. After Shephard initiated a naquadah reactor overload, causing an EMP in orbit 20 miles above Atlantis, the resulting energy spike shockwave which would last only a couple microseconds.. overloaded the computer system of Atlantis to eradicate the "active" software virus from the monitoring system. Atlantis computer system was rebooted and the stored operating software brought the city back up to clear running condition.

The screen which very briefly "flashed" before it was "business as usual".. ended up being random letters. It would have been more nostalgic, given that the Atlantean computer system is known to be "old".. to use the flash bootup screen from an 8088 processor based motherboard computer.. but translated into "Ancient". 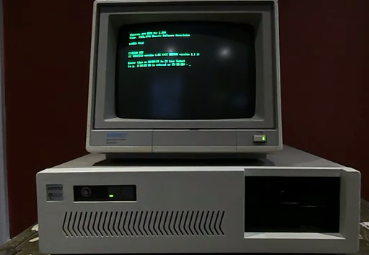 However, from watching the screen throughout this episode, there is a noticeable "flash" of the same as above and I think it is not meant to be anything but "background filler" as is the matrix style lexicon drifting across the screen. So.. not a hidden message, but just part of the normal running software "screensaver". The image below was early into the city's "Medical Emergency" biosecurity lockdown. 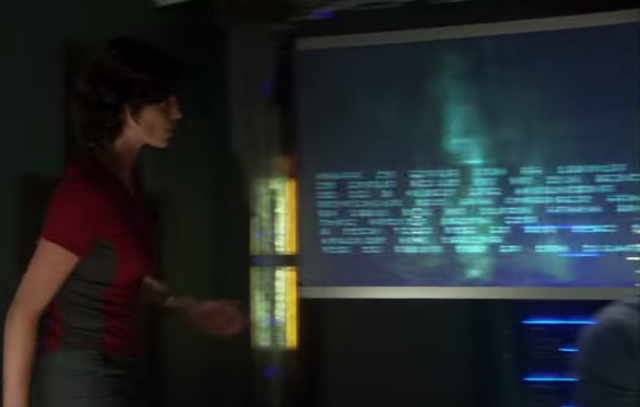