Please note that sometimes, probably due to diminishing production schedules (or cutting down "time-on-the-clock"), the prop department randomly types stuff.

..if only the prop department had someone on-staff that could read and write multiple alien languages. 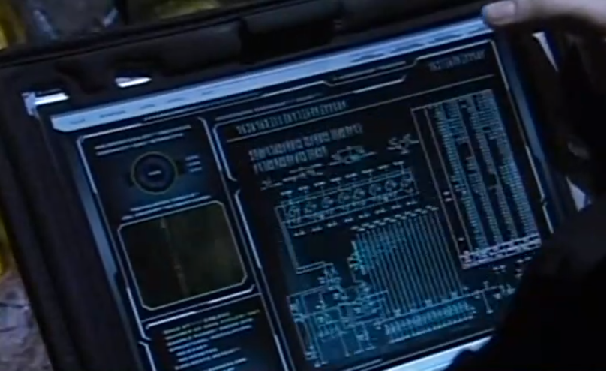 ..and sometimes the prop department just writes whatever pops into their head 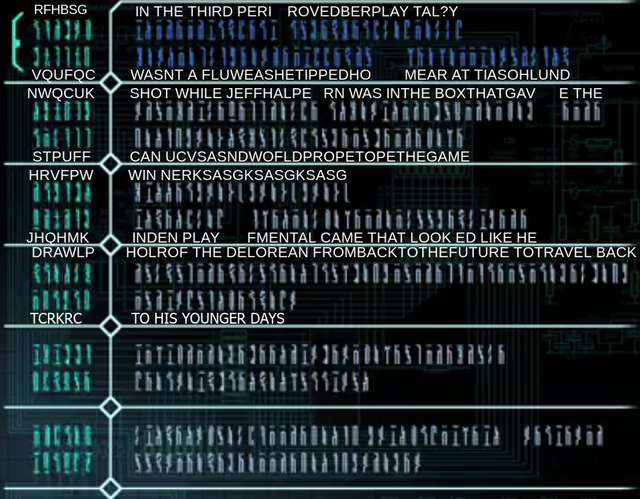 They're nonetheless really great guys (and girls?) who put amazing props in front of the camera to add character story depth and also to stage the drama better. But if anyone is deserving of pickles for Christmas.. it would most likely be the accountants who says "That Costs Too Much..".

An odd thing happened when I tried translating a Wraith computer screen (prop) with standard Wraith lexicon.. wouldn't work. Turns out it was written in a more advanced (ie: complicated) form of Wraith language which the standard download reference doesn't do too well with. Sooo.. instead of posting that, I'll switch to a computer screen (prop) image from StarGate Universe. 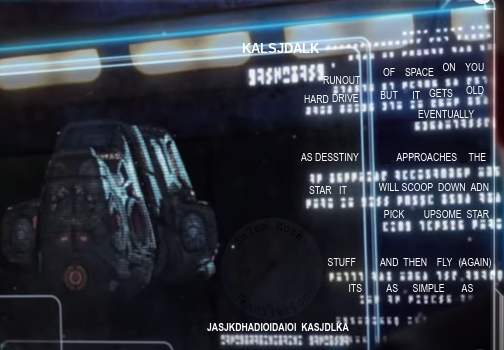 Also I'm advised to start including a personal watermark indicating responsibility for the translation.

..Now have to figure out how to reasonably do that without embarrassment. Buggers

(May 12th update.. am watermarking relevant translation posts up to this point)
Top

Merlin's Computer
Translation is near accurate.. As Sigmund Freud once said, “Sometimes, a cigar is just a cigar,”. In my experience, sometimes a prop is just a prop. 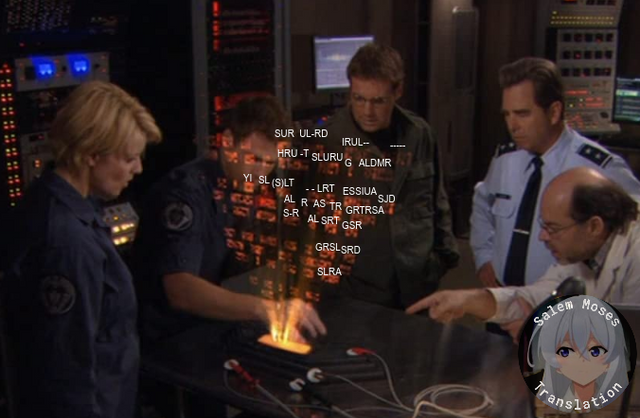 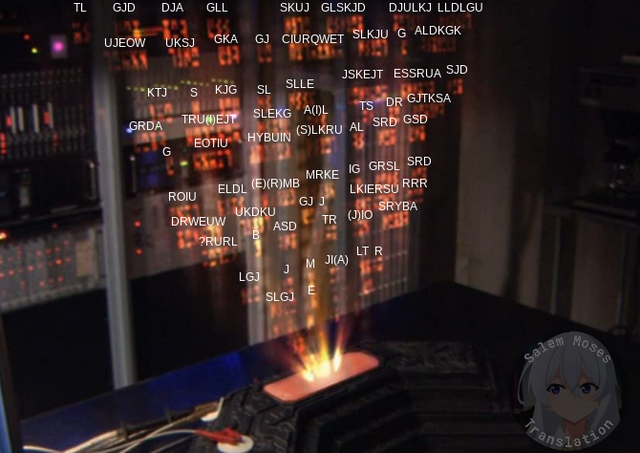 Device built by Merlin the Ancient to conceal his research.
Top

StarGate Universe: Long Distance Communication Stones
.......... A Prop Of Another Color, Is Still A Relevant Artifact On Life's Stage ..........

According to the Better Health Channel (www.betterhealth.vic.gov.au), and I quote:


"In relationships, communication allows to you explain to someone else what you are experiencing and what your needs are. The act of communicating not only helps to meet your needs, but it also helps you to be connected in your relationship." 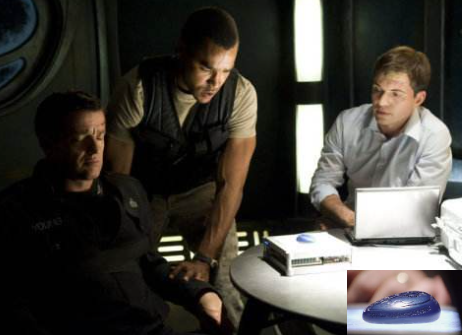 And in translating this prop, allowing my creative mind to wander.. I began to think about the "morale of the story" behind StarGate Universe. In particular, contemplating the defining point of what makes a relationship borderline successful, and therefore meaningful with probably the same feeling of nervous anxiety as any kind hearted & supportive guy about to give up the tv remote to his girlfriend.. during WrestleMania Pay Per View. Versus a relationship borne of convenience and self interest that inevitably leans dangerously toward a social/financial/professional liability, restraining order pending, and therefore requiring yet another set of door locks, having to change all your online passwords yet again and update your facebook status to "definitely NOT dating anymore.. shoo shoo".

The subtle notion dawning on me now as to what connects us as viewers to a "Gilligan's-Island-In-Space" drama is that one of the underlying core tenants which makes up the evolution of the StarGate Universe story.. basically is the exploration not of the unknowns of space, but rather the unknown territory of relationships. A very human drama, where opposite genders of varying levels of learned (behavior) "skill" (some useful, some not so useful, and some simply annoying) must overcome their inherent prejudices & social limitations in a stress filled claustrophobic environment (ie: commitment) and learn basic diplomacy (It's an art, not a science) about cooperatively understanding one another and to communicate (ie: to connect) with each other in a productive manner. We are all alone, even in a room filled with people. A basic primal fear within each of us, is in trusting someone different than ourselves, especially when that other person can look at the very same thing we are looking at.. for several long minutes.. standing right beside us.. and still have absolutely to clue what we're thinking. So, basically, "connection" & "relevancy" helps like fertilizer to grow mutual respect so "trust" can blossom. Yep, fertilizer is what comes to mind right now. No Salem, it's just a phase he's going through. Lunar notwithstanding. 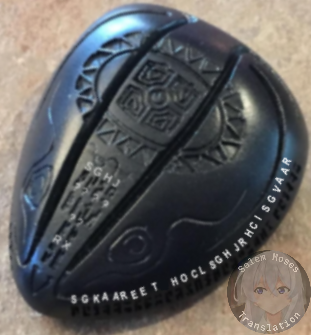 I was also wondering about the meaning/purpose of props, since we see so much of them. In quoting "The Importance Of Props In Film" by Dick George Creatives"

"Props are crucial in the story-telling; they complement and motivate the character, helping the actor feel more 'the part', setting the scene, identifying a particular time and place and cultural setting, sometimes even becoming a huge focus of the film."

Hmm.. as art imitates life imitates art.. people naturally get nervous when they are standing in front of strangers. By use of exaggerated body language, or a prop in which to distract the attention of everyone's piercing gaze which silently screams "entertain us". (To sidebar a bit, "Acting" in a fluid natural manner is a really tough thing to pull off. Kudo's to any actor brave enough to step infront of a camera with little-to-no notice of a live audition to vocalize your rehearsed monologue. Yep, even I was bit by the acting bug up on stage which is why I have a deep seated appreciation for relevant props). Inanimate objects helps break the ice in a nervous environment, like an interesting magazine on the coffee table at the dentist's office. Or another explanation from a future mother-in-law as to why little johnny is always absentminded about anniversaries.. sure, it's probably his blood sugar, and the moon phase keeps changing, and he never really recovered from that Daylight Savings Time fiasco. Sure, there will be other anniversaries, I was simply wanting to connect to someone who would think little anniversaries were relevant. -but he's always mindful of the really big dates. First day of Open Rifle Hunting, First day of televised college football, Free Fishing Day when anyone (resident or non-resident) of any age may fish free without a license, and lastly the exact date saved to his smartphone calendar (with alarm sound) when the limited-time-offering McRib returns each Autumn to McDonalds. ugh, but I digress.

(*taking a moment to breathe a few times, and try to think positive*)

In any relationship, be it a job related professional demeanor that one establishes harmonious rapport with coworkers (respecting personal space and topical etiquette), or an interpersonal cooperation toward a shared goal or interest. Once a communication link has been bridged, usually through any manner of real-life props (small talk over the coffee maker, bumping into someone at the copy machine, or the end-of-day crunch when productivity hits it's highest accompanied by just as many sentiments of being woefully understaffed). Supportive dialogue, piggybacking on a sense of dependability through checking in to "touch base" on a predictable regular basis (ie: each evening in providing a sense of mutually shouldering stress, each morning with a text sending a short note of encouragement for the day ahead, or each Friday helping to bring a sense of closure from a hectic work week and the prospects of enjoying "time off" on the weekend).

There are many roads between two distant points on a map, even if both separate individuals take seemingly different routes.. All roads inevitably lead to the same destination.. if both share the willingness of reaching that journey's end, together. In an offered opinion, from someone who still is nervous about opening certain doors in life. Finding something to break the ice in connecting to someone, then finding relevance in sharing a common opinion with them. Only provides the opening musical note as the curtain rises on the stage set for another enactment of life's ongoing story. All actors perform with skillful use of pause, of exaggeration, of poignant turn of feelings.. all used in the silent dialogue of a consciousness exploring eternity. Be it prone to success or failure, the journey still refines the meaning of what it is to be human.

Even if the staged drama is between two isolated people travelling through a vast emptiness of space, on a planet filled with rocks. 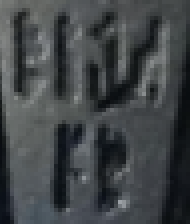 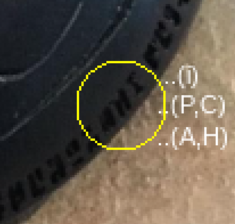 Funfact, I have absolutely no idea what to make of these different symbols found on the top & side of the communication stone (except maybe that last one on the first line might be an "N".. sort'ov looks like an "N".. maybe). The unfamiliar symbols seem very worn and thus not very friendly toward helping me to understand them better. It's as if this stone doesn't want me to understand it. Taunting me..

Still, understanding how people share a sense of self with one another through use of communication.. small talk. I think would help me in not being so anxiety prone when meeting people. No more the invisible wall flower on the fringe of a social gathering. I've now enough strength to lean against a support pillar in the cafeteria, a couple tables outside of the active conversation area. It's still progress, so it should count.
..........

Next topic.. Shields, with accompanying dialogue about my personal experience with them.. and a new discovery just found out. Turns out, a shield which is used to protect a habitable construct, can (by the nature of it's operation?) cause lifeforms inside to not show up on a life-scan taken from outside the shield. Don't understand why, but perhaps it blocks the "life" energy frequency because that frequency is within the operating range of the shield's "energy blocking" barrier? I dunno. But everyone here was surprised when a comm check came in wondering where we all were.
Top
Post Reply
14 posts