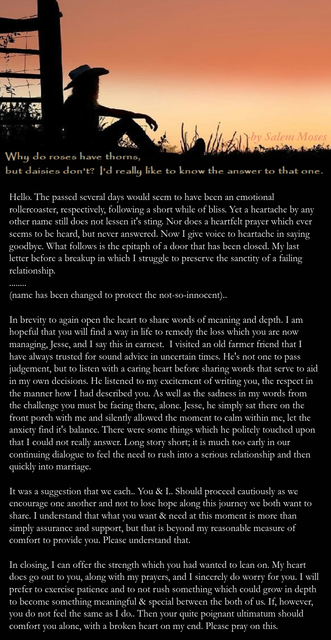 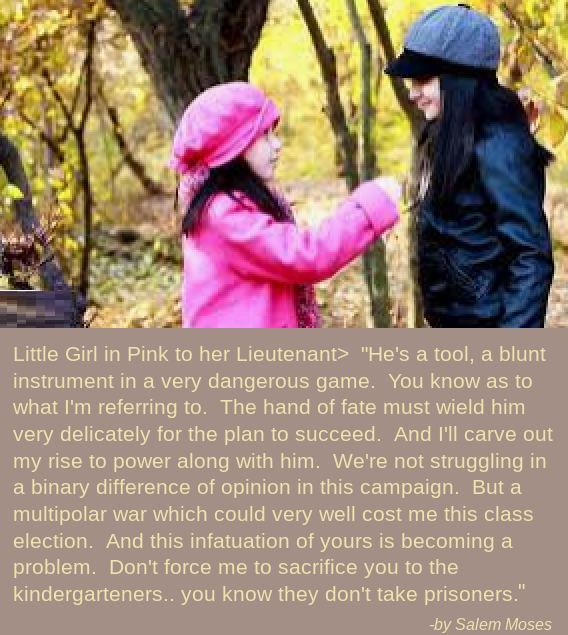 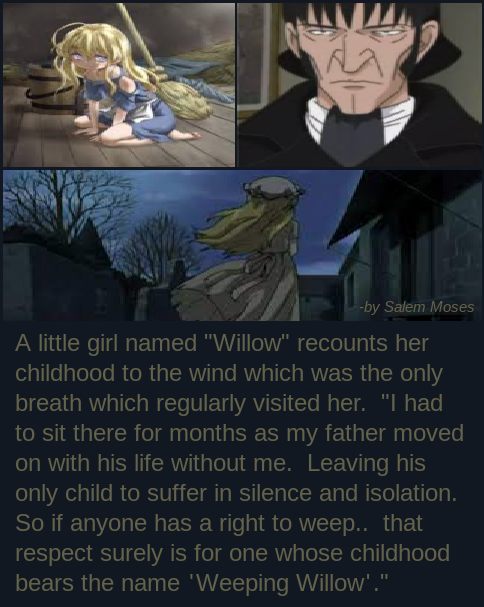 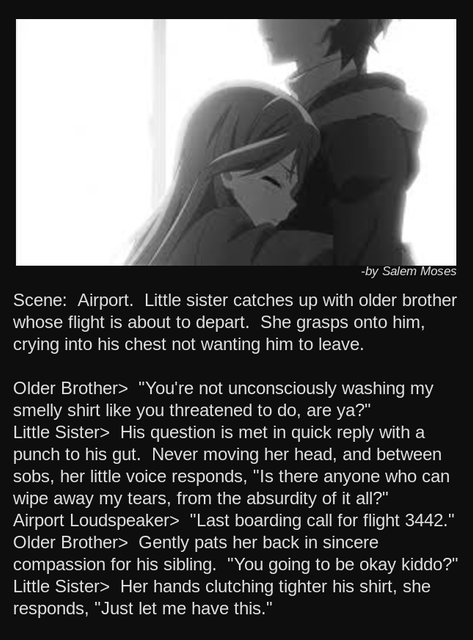 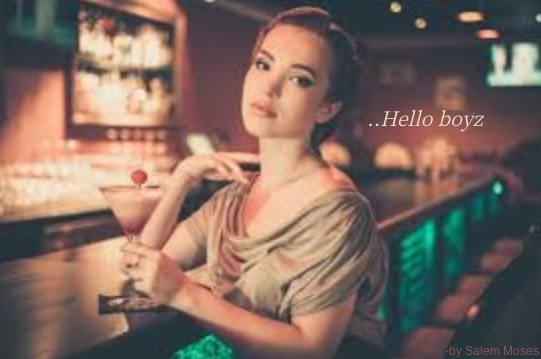 (Seen this sort of thing happen.. man at a bar, woman at a bar.. so am poking fun at it. Welcome to my therapy session)

The bell atop the door to a bar rings like a cash register making a sale. Ladies of the night frequent such establishments and with each bell sound from the door opening, sees another potential sale. This is one such likely occurrence as a lone wallflower of an often overlooked female of the same gender silently watches the drama from afar. Her blind date having stood her up, again.. so she sits quietly sipping her cherry cola and tries not to be obvious. Scene: Woman at bar notices random guy sitting beside her. Between intoxicated sips from the last drink the previous guy bought her, she decides she wants another freebie. So begins her practiced monologue: "You're not becoming attracted to me, are you? Like wanting to lay a whisper on my pillow and fall into one another's eyes?" Guy at bar looks at her, then the opposite way, then confusingly points to himself, "..you talking to me?" Woman smiles, holds her shot glass to her cheek, and in her eyes she sizes up his wallet based on his attire. "Sure.. why not. Would you like to offer me a drink and tell me all about yourself, Mister..?" The guy quickly downs his drink, gets up to shake her hand, forgetting that the condensation of the beverage was still on his fingers. The woman pulls her hand back, not sure whether to disinfect it or follow it to a long shower, but responds.. "How old fashion, you're a real rarity in this bar. Must be your first time here." The now nervous guy sits uncomfortably on the bar stool next to her, and hurries up in telling the bartender to give him another one of what he just had. To which the woman beside him includes one for herself as well, at his expense.. of course. The man focuses on the bar in front of him, as the all too obviously attractive woman leans in to let her words resonate in his ear. The man's gaze then lifts toward her as his head slightly tilts to one side, "I am not entirely convinced that your kind is not another form of viral laced manifestation upon the landscape resonating out of harmony to your surroundings & each other". The woman at the bar begins to withdraw as her expression grows with concern. "My kind?", she asks. The now more confident fellow replies, "Yes.. Humanity". The woman at bar now with her head unconsciously tilted in confusion, asks the obvious, "..humanity?". The bartender deposits both custom mixed shot glasses onto the bar in front of them before returning to his other duties. The woman, thankful for the distraction of proposed alcohol, takes the shot glass and quickly downs it. Eyes now wide open, gasping for breath, she nearly slams the shot glass back onto the bar then loudly shout at the bartender, "What kind of crap did you put in this, Sam?" The fellow next to her picks up his shot glass, moves it under his nose to notice the bouquet, then with an unbroken motion he downs it and places the shot glass carefully back onto the bar. His eyes wide open and likewise gasping for breath. He tells Sam, "Yep.. that's the good stuff ol'boy. Runs you over with a truck and then backs up to run back over you. That "hair of the dog" hangover cure will really keep people sane. Pedialyte and green jalapeno tobasco sauce with a pinch of aspirin for the pain." The woman next to him, now trying not to sweat from her insides burning up, has only one word to address the pain.. "Why?" The fellow returns his attention to her as she slumps her head on the bar, trying not to throw up. "Why.. what?", he asks. Her head rolls onto it's side to allow her to see the stranger who wrecked her intoxication, bringing her back to her sad reality. "Why don't you like alcohol? It hasn't done anything to hurt you.. The world can't function without alcohol, and besides.. what's so great about reality anyways that a person should see it sober?" A moment of silence falls between them, the travelling salesman peddling a new wakeup remedy.. and an attractive yet ugly persona of a woman down on her luck. Opposites.. attracting nothing but chemistry. But the bad kind of chemistry, the one which doesn't include alcohol in her opinion. She should just shoot the guy and be over with it. She can see the morning headlines, "Death of a Salesman"... might even be a subnote on the theatrical play by the same name. Feeling apologetic, the fellow at the bar puts his coat around her and waves to the bartender for carrying his company's product.. before the salesman leaves out the door as the bell rings another time. In his mind, his only thought is "cha-ching", -another sale. Opening his black little notebook, places a checkmark next to the address for this bar. Below which are single entry locations in New Jersey, then outside London, two in Paris, and finally several on 2nd planet in the Zeti Reticuli binary star system.
Last edited by Salem Moses on Sun Jan 01, 2023 5:58 am, edited 1 time in total.
Top 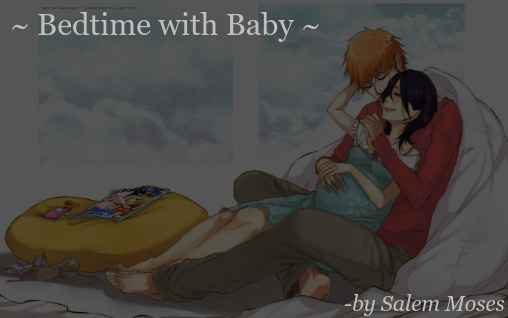 Scene: A weary husband sore from a long frustrating day at work, in the uncertain trenches of the corporate machine.. finds rest with his pregnant wife. The man speaks, the woman can do little but smile in response. There is love to be found here, seasoned daily with a measure of sadness.

Husband> "As your strength wavers with carrying our child, I gladly share of what strength is left to me in protecting and caring for you both. Always in my thoughts, the memory of your smile heals my fresh wounds. Yet my heart struggles daily in what is best to do for our family."

Wife's tired eyes looks up from her growing waistline toward her husband and smiles. Her fingers intertwine with his hair which comforts him.

Husband> "If a son should be born to us, then I leave his naming to the custom of your people. That he may be accepted among the tribe and his strength would serve to protect you even when I am long passed. The last of my strength, I shall leave for him. His road won't be without bumps and scrapes, and I fear my name would do him no kindness in your tribe. But if a daughter should be born unto us, I shall prepare a world fit for her to dwell in, one in which her life would be celebrated in the hearts of all who come across her. Taking up the mantle which I should leave at her feet, and after the custom of my own people. The custom of how I have lived these many years.. this world shall know her name as.. "hope".

Wife's tearful eyes looks from her husband's drained expression toward her growing waistline again. One of two futures awaits for the child which is yet to be born unto them. In solace, her thin lips tries to smile once more to comfort her dying husband before he is called once again.. to the battlefield known in this world simply as cold indifference. Their pantry is bare, the bill collectors trouble their phone, wolves howling at the door, and this apartment may soon be taken from them. But in this one solitary moment, despite all the harsh reality which stares them daily in the face.. they enjoy one another, and share in a hope for a better tomorrow.
Top