Thanks, Kate and Juliette for your comments on this episode.

No, Kate, I don't know the answer to your question about the script for Ugly Duckling. Maybe somebody else will come along who does.

I do know that I totally love these comments: "But continuity aside, I like the little peeks into Mac's past. And the peeks into his personality. I love the opening scenes where he's playing table hockey with Susan. I think this was one of the earliest moments where a bit of RDA's own personality was beginning to peek through into MacGyver."

Thanks again for all.
B
Top

Dear Kate,
I googled it and skimmed through it and it looks complete?
https://www.springfieldspringfield.co.u ... ode=s01e18

lesliekretchmar wrote: Dear Kate,
I googled it and skimmed through it and it looks complete?
https://www.springfieldspringfield.co.u ... ode=s01e18

Thanks, Leslie. I've seen those. I've been using the closed captions for the episodes (which may be where those scripts were taken from). My old computer has software that will pull out the captions into a text file, and I've been trying to complete all the episodes before that old computer dies.

If you're talking about the character name in that episode, though, the captions and scripts don't seem to offer a name. Everyone is accounted for except the buyer, the one who chooses the bridge as the site of the test. The actor is not even listed in the credits at the beginning or the end of the episode. Very peculiar.

But then, the kid who played Ahmed in To Be a Man was never listed in the credits either, and that was a significant role. Makes you wonder who was handling the credits back then.

Thanks, Kate! I appreciate all your knowledge and the amount of work you do for RDAnderson.com

Anyone wanna start on Countdown?

Thank you for starting the discussion of "Countdown", a very good episode, IMHO.

We learn that Mac was in Viet Nam on a bomb diffusing team. That gives us some insight into his past.

The cruise ship bomb(s) is a scenario that could easily happen in real life today.

Mac as usual comes up with the solution to the problem in an awesome way.

Too bad Charlie didn't make it.

Thanks Kate for the MacGyver Lexicon entries for this episode.

Here are some of her screenshots for "Countdown":

I loved the direct communication between the bomb "defusing" team onboard and Mac and Phoenix (especially Pete - though I loved the trap that Mac set for Donahue). I also love the last picture posted in this thread by B/Kate!

I don't have a lot to say on Countdown, it's an okay episode to me – meaning I like it but it's not one of my favorites.
The story is realistic (as B said, it could happen anytime) and the nature of the bomb is really well reshearched. I never saw any movie or show that displayed such a complicated and well thought bomb. Even nowadays with all of our high tech stuff, it would be really difficult to defuse it and they would definitely need a real-life MacGyver to save the day!

) and Charlie is (well.. was..) a nice guy. Too bad he had to die, but his death allowed all the others to survive since Mac knew what not to do to avoid the explosions.

Carole is also a very nice character. She's a figure of authority on the boat, she's strong and brave and wonderfully handled the situation.

I also like Mac and Pete's relationship in this one. It's (I think) the first time we see them good friends and accomplice. The whole "game" to reveal Donahue's guilt was great

The first scenes with Susan and the failing robot was really fun too! I love the way Mac answers the phone:
"Whoever you are, I owe an incredible debt of...
- MacGyver?
- gratitude...
- Good, I'll take it right now.
- Peter?
- On second thought
- Now, hold it.
- Mac, I've got a job for you.
- Pete, I'm on the verge of a great discovery.
- Sure, you are.
- The world's just waiting to find out about shoe polish egg foo yung.
- What was that?
- It's my cranky maintenance lady being her usual self, cranky."
Love that exchange

Since it's Friday, I am allowing myself to move on to the next episode: The Enemy Within

It's a great episode, the story is very representative of the 80s: Russian spies and bad guys, and a hero to save the day!

The unusual thing was the 'hypnosis' part, but a great way for bad guys to make other people do the work for them

The "no more brakes" scene is very stressing, even after seeing it multiple times I'm still very tense ^^

It has fun parts too, like the scene with the medical examiner, he looks a little old, like Mac says "You've been down here too long"

But he's a very funny guy, the whole scene is

And the highlight of the episode is the science conference, where most of the action takes place, like when Mac talks with Robert the robot

And of course the Tuxedo!!

He looks so ill at ease! Just like I am when I'm "disguised" in formal clothes...

But at least HE looks great.. 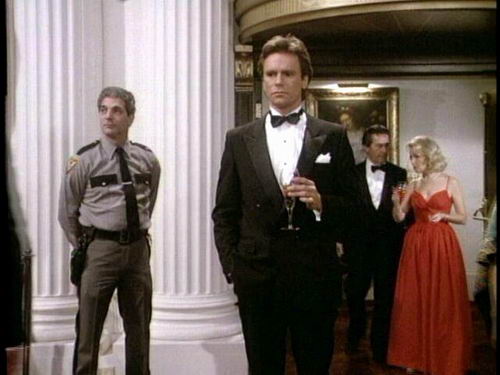 Thanks, Juliette, for starting us on a discussion of the next episode...."The Enemy Within."

I agree with all of your comments.

I love the "kiss" from the Russian lady - even though she seems a little old for him....

He looks especially adorable in the Tux.

Thanks for the photo.
B
Top
Post Reply
160 posts