Kate, Pam, oh you two little devils. What do you do to me? Temptations, temptations...

And now back to the topic.

Another day in the mountains brought a great surprise. We found a cave - grotto - in a glacier above our resort. Once Jack had spotted it, he just dived into it, leaving me far behind. After a while of wandering through a maze of tunnels, I could hear familiar sounds of metal clattering against ice. I breathed a sigh of relief and followed in the direction where the sound was coming from. More steps through the narrow tunnels, a couple of corners, and there he was, plastered to a wall, fully concentrated on his climbing. 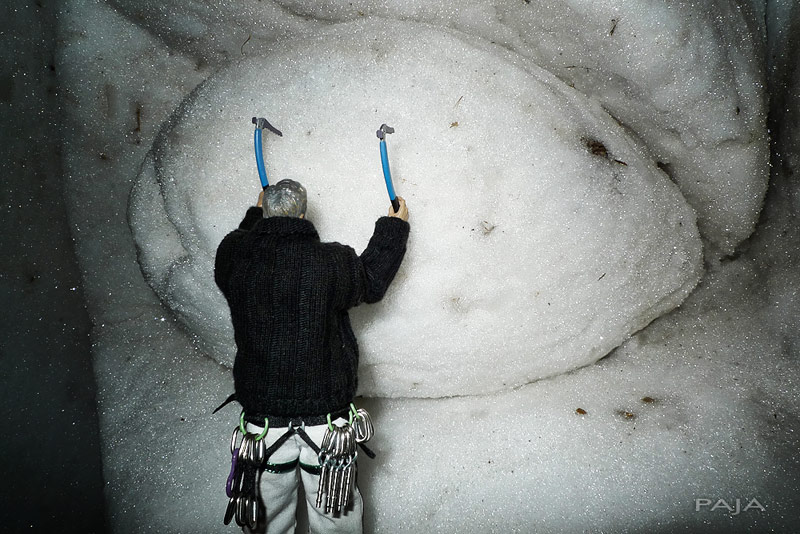 In an eerie light of my head lamp, I watched Jack’s progress. He did not pay any attention to his surroundings and was moving systematically like a machine. There was something very disturbing about him. 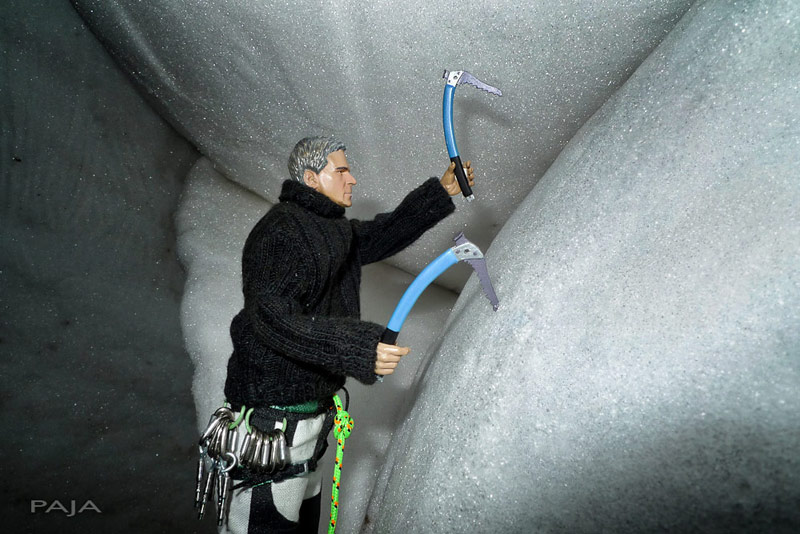 Now, that really scared me.

Paja: Jack, what are you doing there?
Jack: Euge. Euge. 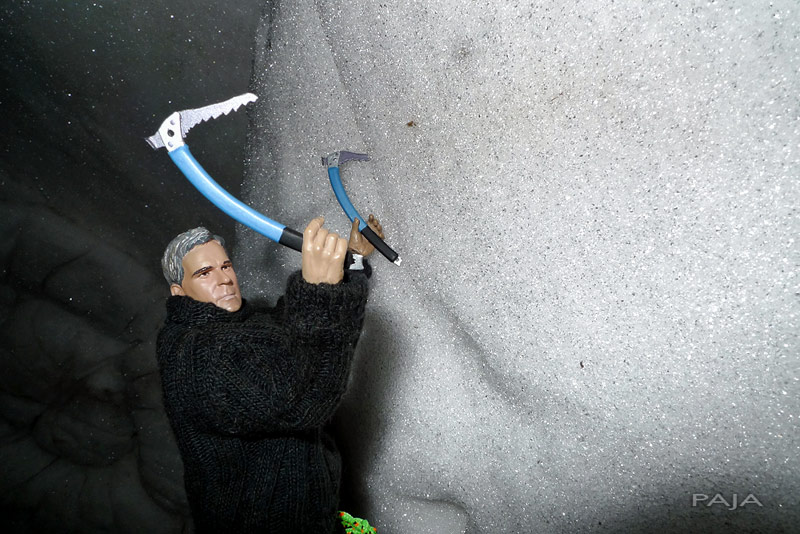 When I heard him speaking Ancient, I felt totally helpless. I thought he lost it. But I did not know why. What happened here? What could possibly cause this?

Then, at some point that probably presented the top of his frantic climb, Jack yelled a victorious “YES!” and started to rappel back to the base of the mysterious wall.

When he was securely on the floor, he just kept standing there without a word, his gaze fixed on a strange ledge he had reached seconds ago. He was drenched in sweat, breathing heavily, but visibly satisfied and proud at his achievement. 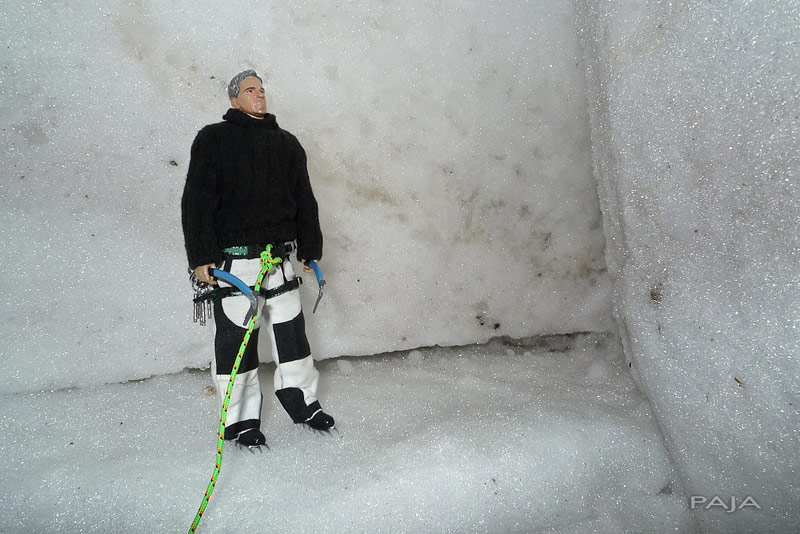 Still puzzled by his behavior, I brought more light to the cave and begun to recognize the horrific truth.

Jack: See? Now you see where I was? 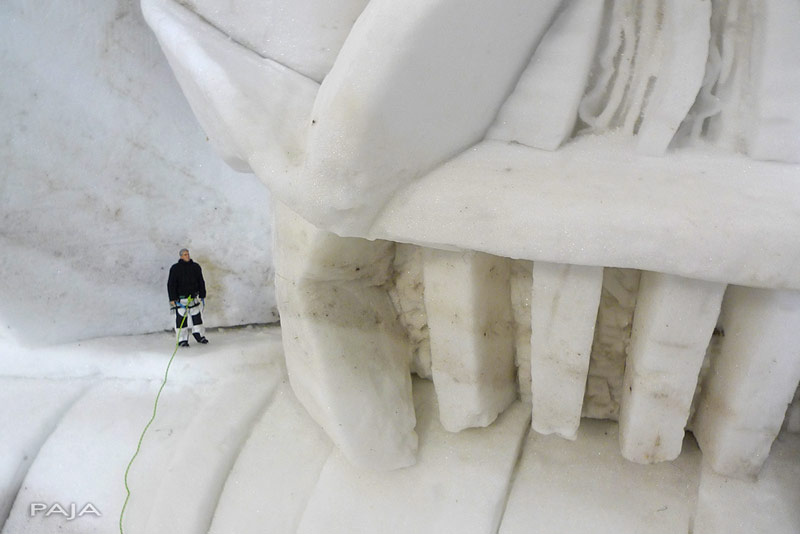 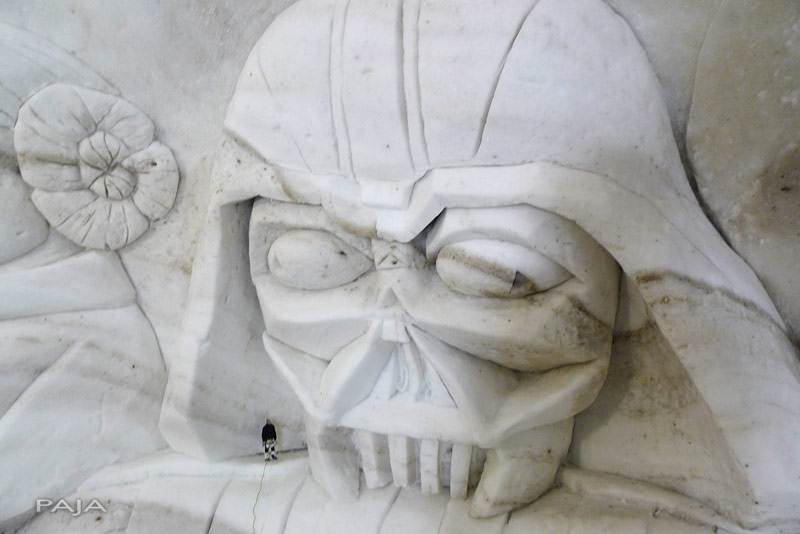 Jack: That was so cool. How about climbing up Yoda now?
Paja [looking closely at the whole wall]: Ummm, I don’t think so. Obviously, none of these are meant for climbing. It’s more like a gallery, I’m afraid. 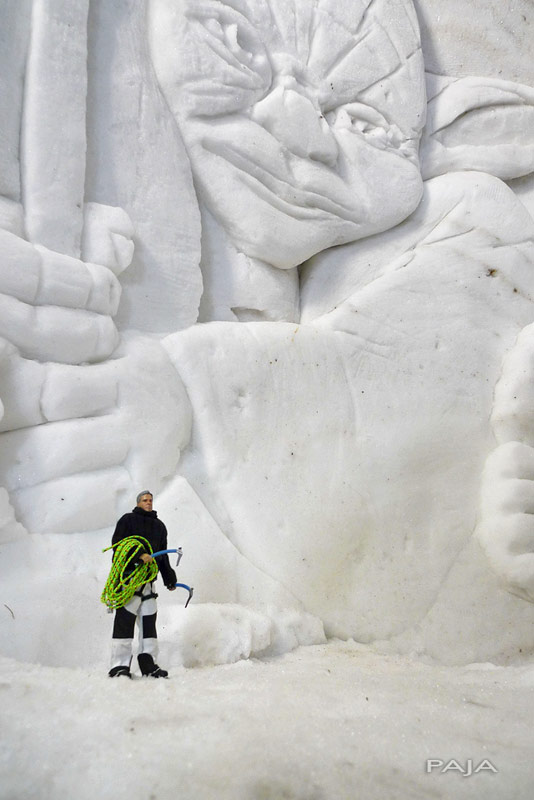 Jack was clearly disappointed that he couldn’t show more of his athleticism here, but was wise enough to accept the rules.

Jack: But I did beat Darth Vader, right?
Paja: Yes, Jack. You’ve got your coup. 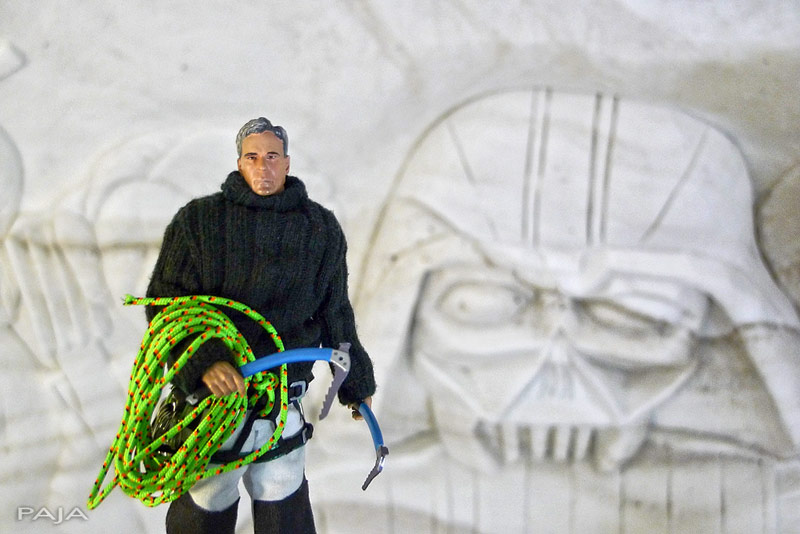 One thing was for sure: after this, we could hardly find more attractive place for Jack’s alpine escapades.

Photographer’s note: No ice sculptures were harmed during the photo shoot. I merely held Jack close to the sculpture and the rest is just the magic of optics. I did not touch it with my warm fingers nor dug into it with Jack’s axes. Jack only posed for a few seconds on Darth Vader’s shoulder, but was very careful not to scratch the surface with his crampons. All due respect was paid to the author of this snow art, which incidentally became such a wonderful location for my action figure story.

Part 4 coming soon. Stay tuned for the next adventure of Jack, the mountaineer.

One never knows where Jack's adventures lead him to, and this one was no exception.
Thanks for sharing this and looking forward to another thrilling Jack adventure.

Paja, I love to see your fantastic work back on the forum. I missed Jack's adventures. If I were half as good as you are at photography I'd be a very happy camper.
If you can't say anything nice.....

I admit, given your talent, for a moment I wondered if you had carved the ice sculpture!


Paja wrote:Kate, Pam, oh you two little devils. What do you do to me? Temptations, temptations...

I admit, given your talent, for a moment I wondered if you had carved the ice sculpture!


Paja wrote:Kate, Pam, oh you two little devils. What do you do to me? Temptations, temptations...

Kate, I'm here if you need backup (Bwahahahahaha)
If you can't say anything nice.....

Great pictures Paya! And what a great find! Jack always finds the best places. I guess it is hard to keep up with him for you.
He should have called Daniel though! He would have loved to explore this.

Which reminds me, two years ago friends and I visited a miniature park with buildings from all over the world. I was told to bring SG-1 with me for the pyramides. Here are finally the pictures! The Torchwood team had fun too, they went to the fortresses and old castles and such.

Dome of the Rock Jerusalem:

By then Jack was tired and didn't want to go exploring anymore. It was a very hot day, over 30 °C, and no shadow anywhere.

The world is their oyster.

Thanks Astra and Paja. 'It's a small world ' but it's so funny and brings another perspective.I love it and I think I'm not the only one.

This so imaginative and great!!

I didnt know where to post this, but just got my copy of Kate's Dk book on stargate, with RDA'S Foreword. This is awesome book, and i agree when rda wrote, "Kate, very nicely done, my friend". It is awesome work.
Thank you
Top

A while ago a co-worker of my brother asked me if I wanted a figure for free. The hand was broken and I could easily glue it. I have become a sanctuary for unwanted figures now!
I had no idea who this figure was but the more I looked at him the more I realized that I HAVE seen it before. When Richard Dean Anderson was in Ireland and promoted a video game. Funny how life runs in circles sometimes! So, this is the Halo Master Chief.

I always had wanted to do a similar picture like that with Rick. Unfortunately, they don't match in size.

Here's how I cheat:

So I could at least do this pose:

But would have loved this - Jack also sadly can't put his arm sideways, no ballpoint shoulder joint: