by karinedauphin
Please find an article about MacGyver. I made my best to translate, and apologize if they have some mistakes.
Enjoy

That day when ....MacGyver arrived in France.
From 1980 to 1998, "Dimanche Martin", presented by Jacques Martin, on Antenne 2 / France 2, energized a whole series of TV shows and series in a rendezvous registered in the "pantheon" of the small screen. Among this anthology, MacGyver, whose first appearance in France is dated January 4, 1987

It is around 2.30pm when the spectators of the canal 2 leave temporarily their loved animator and the emission "Everybody knows it" to better find it less than one hour later for the show "the fans school". In the transition phase, they are offered a new fiction from across the Atlantic.

The first scene unfolds "Somewhere in Central Asia, today", in the middle of a vertiginous landscape, supposedly hostile to the Man. At the pinnacle of a vertical cliff, a guy tries his hand at a suicidal climbing company while narrating his prowess. Wearing a cap with red pompom, the blond hair browser does not yet show its incomparable mullet cut. Moments later, he delivers a prisoner locked in a wooden cage while performing his first sleight of hand. It will take eight minutes and thirty seconds to discover this generative lively, playful and tactfully labeled "80s".

The women are immediately conquered by the virility of Richard Dean Anderson. In one episode, he sports a particular black Tshirt, value sweat and wish his muscular finesse. The 6 feet 2 inches tall handyman, able to make a bomb with fertilizer, tree bark and acid; to immobilize a Russian officer by pulling on a rope fixed to a beam; to open a condemned door by removing the nails hinges ... will then be tossed chain chain (Antenne 2, La Cinq, France 3) to finally land on TF1 will propose the last unpublished in 1995 before stringing rebroads into the 2000s.

In January 2018, M6 acquired the rights of the MacGyver reboot, this time played by Lucas Till. For the time, three seasons have been produced, for a total of sixty-four missions. The private channel, struggles to gather with a market share of less than 10% since the second season and a switchover on Saturday night. The "Mac" 2.0, at the forefront of technology, however does not reach the peaks of popularity of its predecessor. 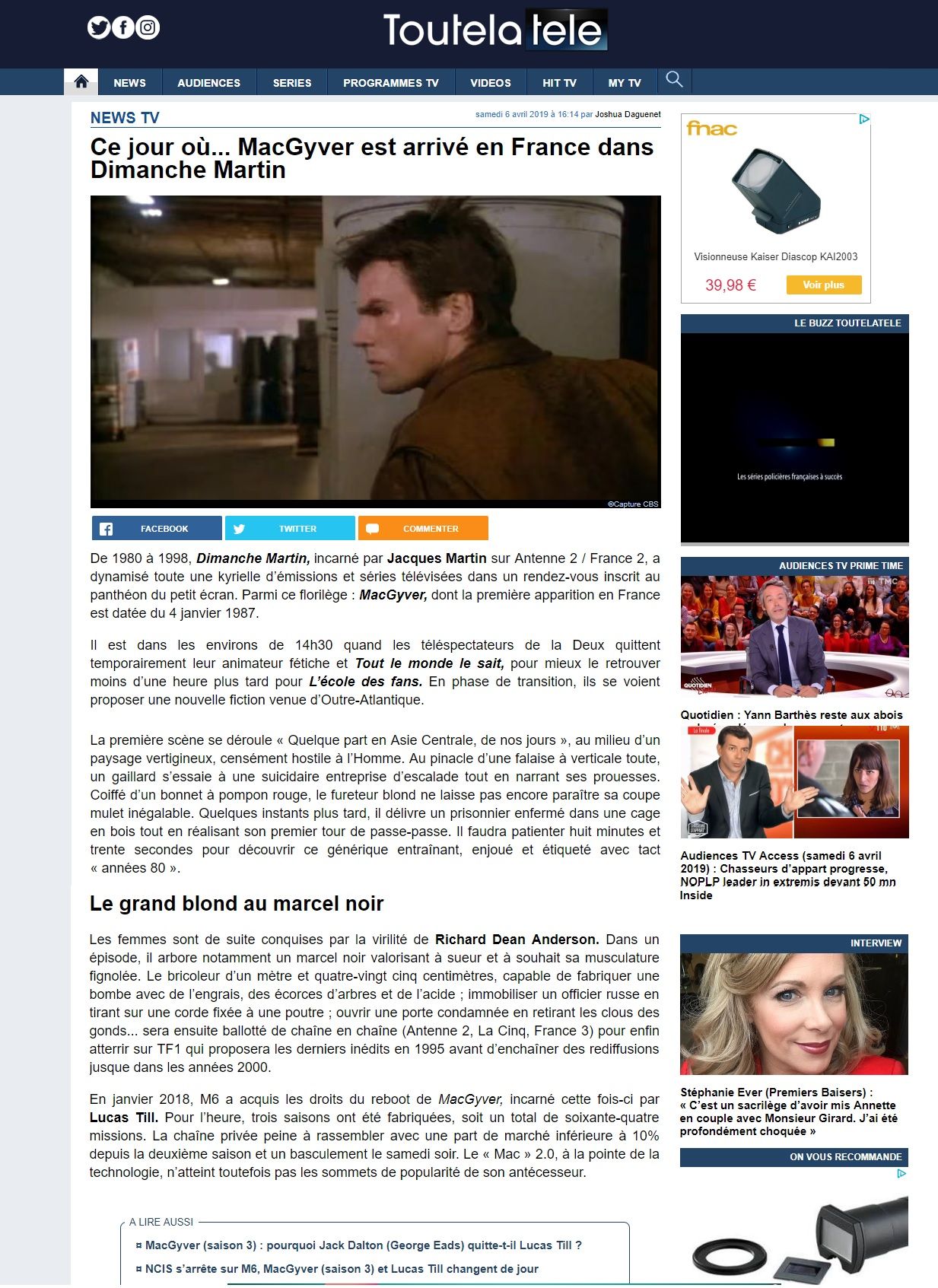 by Jack(s)
thanks for sharing and translating. it may be sound stupid but every time I read that the reboot is not going as well as the original i get a really big grin on my face... I wonder why it is not as good

Jack(s) wrote: ↑
Sun Apr 07, 2019 2:07 pm
thanks for sharing and translating. it may be sound stupid but every time I read that the reboot is not going as well as the original i get a really big grin on my face... I wonder why it is not as good

And like you can read... also in France the reboot is

I just found this video thanks to another fan. It is in french. Please find the translation. Probably someone will translate better. But it is just to hear the "french voice" of MacGyver and to learn (... lol)... that Mister Anderson is a wild guy...

(Laughs) On the video, 1.36, Pierre Arditi is a french comedian

Ms. Vigier: Oh, it becomes necessary
Joseph POLI: You did not recognize that voice. Well now we will still say
(and a picture of Richard Dean Anderson comes on the face of the blurred person)
who is Edgar Givry. Well, it's MacGyver's voice
Ms. Vigier: Oh, yes, of course
Edgar Givry: and there, people do "ah, what a horror!"
Ms. Vigier: I do not watch MacGyver because it's an American TV movie and I eliminate them
Joseph POLI: Well, look. I will not say that you are wrong. Because we're going to say, he says that because we're on Antenne 2.
Pierre MONDY: it's done well, MacGyver
Joseph POLI: Yes, it is well done and it is a series that has a lot of success. is not it ? Jean-Pierre Dusseaux
Jean-Pierre Dusseaux (director of Antenne 2 programs between January 1991 and June 1992): yes, yes, a lot of success. Moreover, I can announce to the fans of MacGyver that in principle, the hero MacGyver, himself, will come to France, and therefore to Antenne 2, between June 15 and 21. And so we will have at the same time the face plus the voice
Joseph POLI: Have you met him before?
Edgar GIVRY: No, I had but it's a boy who is very very wild
Joseph POLI: He is very wild?
Edgar GIVRY: Yes, very. he has repeatedly canceled his trips to Paris. Well, it's someone who protects himself
Joseph POLI: Did he ever hear you?
Edgar GIVRY: I believe yes because he comes to France, he comes to the South of France during his holidays
Joseph POLI: Will he try to imitate you?
Edgar GIVRY: he has a very small voice, you will be disappointed, he has a very small thin voice. No that's not true ! He has a very nice voice.
Joseph POLI: No, that, we do not believe it. In any case, it's one of the American series, sorry, that has a lot of success indisputably
Ms. Vigier: Some American series hurt others. because finally, a little systematically, I tend not to look at them anymore. Colombo, from time to time ...
Joseph POLI: ah, you see ...
Mrs. VIGIER: an old memory. No, but it's time, Colombo was practically alone of this kind. At that moment, indeed, we threw ourselves a little on Colombo. And now, there are so many that suddenly, there is a kind of overflow that even the good ones, we eliminate them a little bit
Joseph POLI: So about MacGyver, it must be said that the target is very wide, because not only, of course, it amuses many children, but adults ... yes, yes, it's all public

by tvero80
Thanks, Karine .Yes , I remember this . Edgar Givry has a beautiful voice . He met RDA in Toulouse in nov 2016 during the Sunday panel ( Rick said his voice wasn't as sexy as Edgar's ) and Dominique interviewed him . if you're interested and haven't read it yet here's the link :
http://www.rdanderson.com/updates/toulo ... nglish.htm

by karinedauphin
Sorry it is in french...
If someone has time to translate (if not, I will do during the week end).
Anyway, it is something to hear... : https://www.franceinter.fr/emissions/la ... phxtGO_sJc

by karinedauphin
Discovered for the first time on Sunday afternoon on Antenne 2 in the mid-80s, the story of MacGyver unarmed knife-Swiss spy recounts the end of a certain bipolarization of the world. But what story does MacGyver tinker with?

MacGyver has made such an impression that even those who have never seen an episode know that the guy comes with a chewing gum and aluminum foil to fix your plane. It remains in the collective memory as the expert D.I.Y man of the 80s whose family name was displayed under explosion in a generic remained cult.

Neither more nor less than all the agents of "Mission Impossible" assembled in one man, MacGyver is much more than that it is the spy "We Are The World" of the Eighties. To go fast, one could almost say that MacGyver was the TV spy what the charity song was to Pop.

He is certainly a spy sent on a mission to the other end of the world sometimes even to recover Western agents in very bad postures, it becomes quickly, in a personal capacity or for the good care of a private foundation, the Phoenix Foundation, an adventurer of the humanitarian. Open to the world, MacGyver sees that times change ...

The spy who refuses to have the license to kill

His only weapon, a kitchen tool: a Swiss army knife. And send it disarmed to the East in an era still bipolar ... All a symbol. MacGyver has his head on his shoulders, he takes note of the movement of the world, Perestroika, glasnost and other thaw are announced in relations between the United States and the USSR.

And if the wall has not fallen yet, at the beginning of the series, it was all quite logical that over the seasons, our spy invites himself into enemy field not in cowboy mode but rather in alter version and pacifist. Over the episodes more missions in Afghanistan, communist China or the satellite countries of the Soviet Union, MacGyver is now interested in domestic affairs ...

This happens, for example, with an episode "survivor" where young people from the Bronx are confronted with nature and will learn the hardness of life Into The Wild and MacGyver invents even "the polluter pays concept in mule cutting mode" in episodes where he fights against unscrupulous, unscrupulous industrialists of the environment.

by Jack(s)
thanks for the translation, Karine

You're welcome. Very done fast this morning. Could be better probably. But the french fans can hear the podcast too.

by bftlovesRDA
Nice translation - thanks, Karine.
All times are UTC+01:00
Page 1 of 2
Powered by phpBB® Forum Software © phpBB Limited
https://www.phpbb.com/