Since Kate has finished the MacGyver Lexicon through Flame's End, can we go ahead and discuss the next in line of our discussions: "The Prodigal"?

Who would like to start the discussion?
B
Top

bftlovesRDA wrote: ↑
Tue Jun 05, 2018 2:11 pm
Since Kate has finished the MacGyver Lexicon through Flame's End, can we go ahead and discuss the next in line of our discussions: "The Prodigal"?

Yes, I'm still plugging along with the Lexicon, but it takes more than a week to do each episode, so chances are I'm not going to keep my head start for much longer. But I'm working on it!

The Prodigal ranks pretty high with me. I liked the glimpse of MacGyver's new (since the observatory) apartment. I liked the chemistry with the younger brother, Frank, and the smarminess of older brother Joey - and the fact that they are brothers in real life. I liked the humor, especially his characterization of the frustratingly incompetent tow truck operator - and the way Frank picked up on what was happening and played along. I liked the creativity of the MacGyverisms which, except for the rocket-powered harpoon, were pretty simple and low-tech. I liked his breathless escape from the guard dogs as he tried to pick the lock (did anyone else have flashbacks to Magnum P.I.?) - and I pictured RDA playing with the dogs in between the scenes. And how much fun do you suppose he had doing that zipline scene?

It was a simple plot, still with a lot of mystery (just what IS his job, with a background as a "hot-shot expert on personal security?), that unflappable nature, a touch of humor, and lots of chemistry. A very enjoyable romp, and still one of my favorites.

There are also a couple continuity glitches in this one. The one that jumps out the most is in the scene toward the end where he has broken into the house and is placing the rod on the stairs to make a trip-line. His watch keeps appearing and disappearing as he does it.

Starting here, there is a string of quite a few of my favorites, one after another - which is what is keeping me motivated to keep working on this Lexicon.

The story is interesting and we get to see Mac's home for the first time!

There are a few highlights that make this episode a little more special to me:
First I love that sweatshirt! I need one... badly..

I love undercover moments, when he pretends to be someone else, and that tow-truck driver sequence was just so much fun to watch

And the most amazing to me, as a car lover and Camaro enthusiast and owner: Franck's 4th gen Camaro 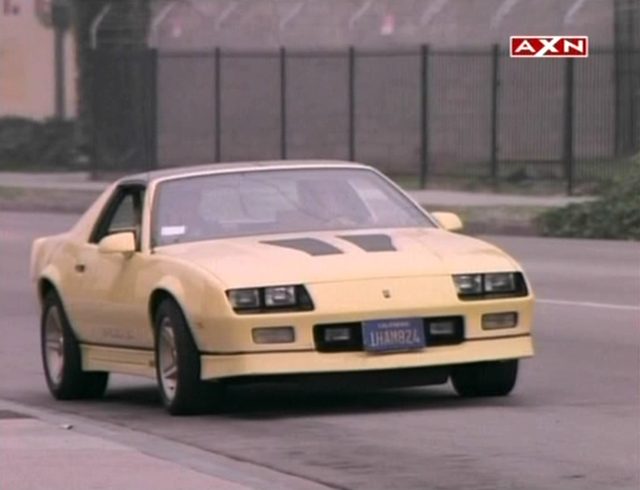 Thanks, Juliette and Kate, for your comments on "The Prodigal".

Does anyone else want to comment on this episode?

The neatest thing about this episode was that we got to see Mac's home and his Minnesota sweatshirt.

The MacGyverisms were terrific = especially the escape from the attic with the wire across the yard. I wonder if RDA did that stunt himself. I would not be surprised.
B
Top

I loved The Prodigal, too!! But, then, which episode have I not loved, over and over again

I thought all of the distractions Mac cooked up (the dry ice in the federal building, the sawdust and boards that he bombarded from above, the bolts he removed from the tires, the way he dropped the car he was towing to block the alley...) were Great, Great! I also loved the mother/son (Frank) relationship!

It's Friday = time for a new MacGyver episode to discuss: Target MacGyver.

This episode introduces us to Mac's grandfather, Harry.

Thanks, Kate, for the great Lexicon entries about this episode.

I like Target MacGyver because it gives us more information about his past. We get to meet his grandfather Harry and learn a little about the rest of his family, even if very little is said, it makes us want to know more

I've always liked the episodes with Harry. It seems like he taught Mac a lot of tricks he still uses and gave him the taste of science or at least this sense of resourcefulness

We also get some hints about his job. At this point he seems to be working for some governmental agency, but my favorite line is when Harry asks Mac what's his job and Mac answers 'a little of this, a little of that.." not very specific

That red plaid shirt looks fine of him too 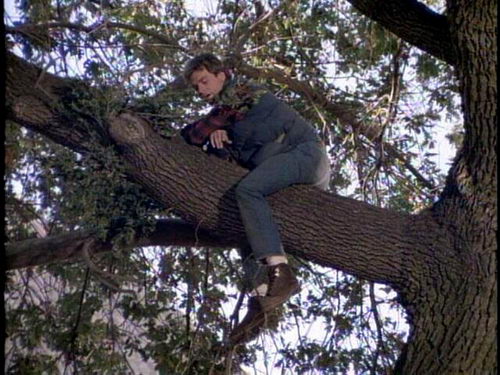 I love when Mac recalls Harry saying "you don't fish for fish, you fish for fishing" I wonder if Harry met Jack O'Neill at some point...

Oh I just LOVE this topic and all of its pics.. thank you all..
Lots of love, I loved the fact that Harry's and Mac's love for each other broke through the years of absence and silence between them and they re-established their special relationship.

I like this episode a lot, mostly because I really like the character of Harry, and John Anderson, the actor who played him. I was happy that they made him a recurring character. I wondered why the writers felt that MacGyver should have been estranged from his grandfather all those years, but I enjoyed seeing how Harry's personality and cleverness had rubbed off on his grandson despite all those years of separation. There are lots of MacGyverisms, and I included Harry's MacGyverisms in the Lexicon as if they were MacGyver's own, just because the two characters were thinking as if they were one person.

That said, I cringe through this episode every time I watch it because of the dialogue. The conversations feel stilted, and the bad guys are so stereotyped. It is filled with cliches and awkward one-liners ("Let's finish this MacGyver NOW" or "It's a nice day for hunting" <shiver>). I also noticed, while writing it up, that a LOT of the dialogue happens off screen. You don't actually see the character deliver the line, but rather we hear the dialogue as a voice-over while the characters are moving or facing away. I really wondered if the original script kept getting changed and they simply edited around certain scenes and inserted voice-overs after the fact in order to cut out the original dialogue. I noticed there are three writers listed in the credits, and I wondered if they kept changing writers or if it was a case of too many cooks.

The other thing that confuses me is the premise - "The Department" that Barney works for, presumably the DXS, knows that Axminster has been hired and is coming for him, and Barney tells him to get out of town while they stake his place out. So MacGyver goes to Colorado, and sure enough Axminster shows up at his place, and even hangs around long enough for them to tap into his phone and figure out where he went. SO WHERE THE HECK ARE THE AGENTS THAT ARE SUPPOSED TO BE STAKING OUT HIS PLACE?"

Barney and his men SHOULD have captured Axminster right then and there. But then, of course, we wouldn't have an episode.

But having said all that, the relationship between MacGyver and Harry makes the episode worthwhile, and it makes me happy that we get to see more of them together later on. Despite everything I've said before about liking the "mystery" of the character, I liked having that little glimpse into his family and his background.

BTW, I've just finished uploading The Enemy Within. I'm only 5 episodes ahead now, but I'm still paddling as fast as I can.