I hope all of us going to Knoxville can meet up, so much fun.
"another day, a whole 'nother set of fresh possibilities, I am a sucker for mornings" MacGyver
Top

i found this photo what a smile

ergomac - that's a GREAT photo!!!! THANK you for finding that.
B
Top

What a smile indeed ! I love the high cheekbones too , he looks so kind when he smiles . It warms your heart !

THANKS for finding and sharing this pic, Erg ! 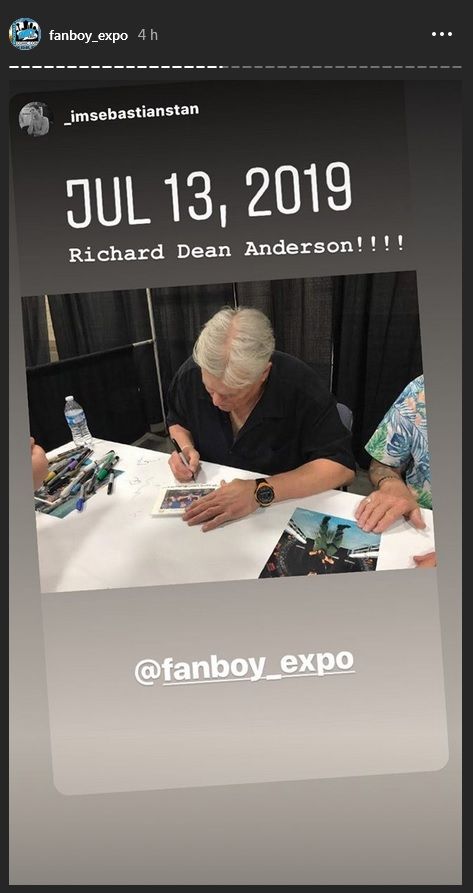 Nice part !(talking about the hair of course

). Must be Paul Brown 's hand in a Magnum's Hawaiian shirt on the right ,right ?

Ok my turn to share my experiences from the Knoxville Convention. I brought Richard a Simpson's comic book and it made him laugh and he said he didn't know they had comic books so he thanked me and was so happy to have it. I also gave him a big honking paperclip 5 inches in a gold color again he laughed and said I will use this it is practical. I asked him a Macgyver question if it was really him that parachuted out Jak Daltons plane and he said I could have because he skydive at the time but they would not let me. I also asked him if the airplane in Stargate season 6 that said Anderson Air was his dad's plane and again he said it could have but we were shooting in Canada you know and he said boy you are an observant young lady. I was wearing the Sea Shepherd shark fin with a silvery chain and he said I have on too but my chain is not as nice as yours and I kinda scoffed at his remark but thanked him. He shook my hand at the end and I waited for Teresa and took more pics of him. More later from the second signing. What an awesome man and experience. I will never forget.
"another day, a whole 'nother set of fresh possibilities, I am a sucker for mornings" MacGyver
Top

Beata, what a great report! It sounds like you were in control of your emotions and did not get sidetracked from what you wanted to say to him. Did you go to his Q&A? If so, do you remember anything from it? How did you do in the long lines of waiting?

Well, thank you again for your great report and if you think of anything more you want to say about it, please feel free to come back and report more!
B
Top
Post Reply
48 posts