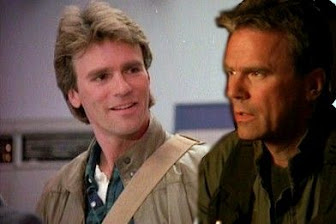 It was you who introduced the idea . what do you think ?
if we can do a quick job, we can offer for January 23 maybe.
I'll think about a little story today. Give me your ideas. Who could do photo montages ? ( I have one too basic software).
And Annelies for video montage, yes...
Top

I'm just finishing a little scenario I propose to you in a day or two.
You tell me what you think. If you have other ideas too.

It is in French of course . It will translate it. Who can do it ( my scenario is six pages!) ?
It will find one or two Macgyverismes inserted into the story.
Imagine the photos also build and then make the video.

If you agree to do this project together.

Well I could try to translate it,but I don't think he reads fanfictions or watches videos either...even if it is for his birthday.I'm not sure though.
V

Eeehhh I really have a lot of practice you know...... just Figured How to make a screencap don't have a clue if I can make a video of those two....

but I will give it a shot but please try with me so there's a back up if I fail
Lots of love,

Hi LADIES ,
Sorry had some family business to take care off . I can back you up on the Eeehhh part but am un- trained in the rest sorry . :

:
Might have to be New Years goal to train my self in Screencap and Video making .
Should be interest to see your guys out come.
There all way a bomb screen or Escape screen in most program .
Only idea i have, would be to have Mac and Jack help break Nicodemus ( Legend ) out of Jail, by called the jail Paramount .As they seem to be holding Legend D.V.D to ransom.
You might have to run it pass Kate, to see if there anyway to get RICKY to see it on screen or U-tube for his Birthday (unsure about how you would do that )

Sorry Real-Drama-Angel, I finished a screenplay. I seen your idea just now.
Perhaps it's too much to make a screenplay with 3 RDA.

In my idea, it's a story with SG1-robots and Harlan.

The start : Harlan ask the help of SG1 for tin man. But, because of an mistake of vortex, SG1 arrived in Vancouver in the barge of MacGyver in 1987. they don't know where are they.
For Sam, MacGyver is a legend. She said often: "I can to make that, because I'm not MacGyver !". it became an expression.
When MacGyver come at home, the meeting between Jack and Mac is funny.
Then, MacGyver help Jack to enter in Cheyenne Mountain with one "Macgyverism(the stargate doesn't in function sill). There is a little story with Daniel... .Then, they go to P3X989.
Harlan must to tell the truth: he have created MacGyver in secret, but it was a problem in the duplication, and he have to sent MacGyver on Earth and on a different time. Together, they help the tin man and SG1 come back on Earth in present. Mac Gyver have to stay in this time for 13 months because a planets conjonction, and after, he can return in his past with the stargate.
Staying, Jack and Mac will be friends, will go fishing, and see match Hockey...
I tried typical dialogues of our two dear. You will tell me what do you think.

It's difficult to explain, but I can give you my screenplay in French here. I try to translate and perhaps tvero80 can translate too (she's more better in English than me).

What do you think?
Top

Your idea sound funny ,you have put a lot of work into it .Can not wait to see the out come .

My little screenplay is finished, in French of course (8 pages!).

I can to post here, if you want.
But for the translation, is not very easy and perhaps long to do.
Especially for the dialogues , it is preferable that the translation is correct because they correspond fairly , I think, that can tell Jack and Mac